After the success of Stand Up Paddle UK magazine, it was decided to launch another watersport publication named Windsurfing UK magazine (WSUK), again as a collaboration between Peter Tranter and Tez Plavenieks, with 2b Graphic Design as the publisher and Tez as editor. WSUK follows exactly the same path as SUPM in being both a paid for digital and printed title, with a free lo-res issue being uploaded digitally six weeks after publication.

The first magazine rolled off the presses in October 2016 and we are now into the final and fourth edition of its first year. We have already committed to four more magazines during 2018, as it is obvious there is plenty of scope in the windsurfing market place for another title.

Peter Tranter and Tez Plavenieks have both been instrumental in setting up the WSUK website (http://www.windsurfingukmag.co.uk), which in tandem with the magazine, has rapidly grown from strength to strength, attracting its own advertising base with excellent readership figures. To read the freely available online lo-res editions of the magazine, click here: https://view.joomag.com/windsurfinguk-freebies/M0697737001476129249 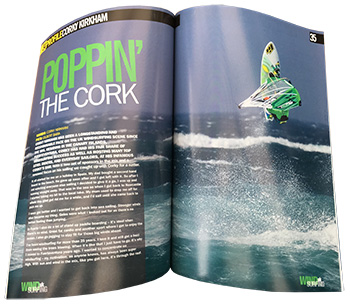 WSUK is yet another fine example of 2b Graphic Design combining an original idea with enthusiastic people within the sport. To subscribe to the printed edition of WSUK magazine, please click here: http://www.windsurfingukmag.co.uk/
windsurfing-uk-subscriptions/